What to expect at this year’s Summerdaze hip hop festival*

[SPONSORED] Singapore’s biggest hip hop and soul festival Summerdaze is back for its second year on Aug 22, with way more star power at The Coliseum. Here’s what to expect at this year’s festival.

Summerdaze isn’t just about Fat Joe and Arrested Development. Other hip hop icons take the stage in full length sets too. There’s Detroit-based underground sensation Slum Village, co-founded by legendary rapper-producer J Dilla and made famous through songs like “Tainted” and “Disco”. A set to await is the Triple Threat DJs feat. Fran Boogie. The collective of three DJs—Vinroc, Apollo and Shortkut—will be laying it down with edgy and dance-inducing beats, as they did to capture championship title in Red Bull’s global ‘Culture Clash’ event in October 2014.

On the local front, show your support for Singapore-based DJs like Matteblacc and the Pushin’On crew. While Pushin’On’s DJ Shellsuit is known for fierce party tunes, Matteblacc—comprising DJs JNR and DREM—will be spinning alternative soul, R&B, vintage breaks and disco. If you’re into some music education and plain ol’ feel good music, there’s a little something for everyone.

Summerdaze is happening Aug 22, 4pm-midnight. Standard tickets are available at $126, with VIP tickets at $156, allowing access to the VIP Front Row and VIP Lounge. 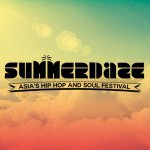